Baby Goat Gains New Lease On Life With Shield Plus 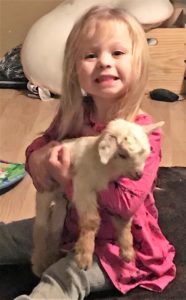 On a cold night in late February, 12-year-old Lane Broyles went out to check waterers on his family’s Alma, Ark., farm and found a newborn goat close to death.  “He was cold and listless,” said Lane’s mother, Elizabeth Biery. “We brought the kid inside and warmed him up, but he was still struggling. I didn’t think he would make it.”

Biery Hill Farms’ herd of Nigerian dwarf goats was in the middle of kidding season, but the family was still working on their facilities after Elizabeth, her husband, Dustin, and their three children moved to the property about a year ago. “We had been rebuilding everything from the bottom up since we moved from our previous location,” Elizabeth said. “We just didn’t quite have our kidding stalls ready yet.”

As the family scrambled to save the frail kid, 3-year-old Maebre grabbed a bottle of MFA Shield Plus off the fireplace mantel and said, “What about this?”  “I had honestly forgotten we even had the Shield Plus,” Elizabeth said. “Maebre didn’t have a clue what it was, but I thought, ‘Oh my gosh, yes, let’s try it.’” She administered a dose and within about an hour, the kid was up running, bouncing and eating.

An employee of Farmers Co-op in Van Buren, Ark., Elizabeth said customers and colleagues have had similar experiences with Shield Plus. She was convinced to take home a bottle when a fellow Co-op employee, Greg Davis, told her how well it worked for his own show hogs.
“He found a little hog that was pretty much on the brink of death and thought he’d give the Shield Plus a shot,” Elizabeth said. “He said the next morning he couldn’t even tell which one had been down. He called it a wonder drug.” 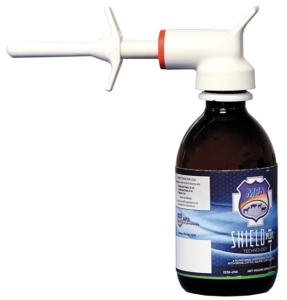 In the 10 days after Elizabeth used the product, she sold several large bottles to cattle producers in her area who were having trouble with calves. “When Greg told me about his experience, I got a case of each size in at the store,” she said. “I bought one of the small bottles to demo, and I’m glad we had it, because we would have never have gotten that little goat back without it. He’s with the mom now and gained almost a pound in 10 days.”

By the time kidding season is over this year, the Bierys anticipated adding 10 more goats to their herd, increasing their total numbers to around 20 goats, in addition to their five show cattle and 600 to 800 chickens. “Everyone with babies of being born of any species needs to have some Shield Plus on hand,” Elizabeth said. “I can personally tell you it works.”

Shield Plus was released in January 2017. The liquid product delivers MFA Shield feed additive in a new way.  Use Shield Technology to boost your livestock’s immunity and help beat the effects of environmental stress. The all-natural product does not need a VFD. There is no withdrawal period. The pump delivers a measured dose of the new liquid formulation through an easy oral application.

Find out more about Shield Plus all natural feed additive here.

This entry was posted on Thursday, March 29th, 2018 at 10:09 pm and is filed under News & Updates. You can follow any responses to this entry through the RSS 2.0 feed. Both comments and pings are currently closed.